Waqās Ahmed is a world-authority on multi-disciplinary thinking. He is an author, artist, scientist, and journalist, among many other areas of expertise.

Waqās is completing his post graduate studies in Neuroscience at Kings College London and has degrees in the History of International Relations and Economics. He is a qualified fitness professional and educator, and was appointed as Chair of the Commonwealth’s Global Citizenship Education Panel.

Waqās founded the DaVinci Network, a global movement that wants to achieve the many-sided potential of humans worldwide. He is the Artistic Director at The Khalili Collections, a diverse and important private art collection, and his own artwork has been commissioned and purchased by a variety of institutions around the world. His journalism work has seen him occupy the position of Global Correspondent at FIRST Magazine, one that saw him gain exclusive interviews with various prime ministers and presidents.

Waqās is author of The Polymath, a book in which he looks at polymaths, those people with multidimensional minds, those that reject specialisation in one area and pursue multiple objectives in different fields. He looks at the roles these people have played in history and why this approach to life could be important to us in the future.

Waqās is Artistic Director at The Khalili Collections – one of the most comprehensive and diverse private art collections in the world. His work includes partnering with the likes of Google and Wikipedia to democratize art through digital curation, visual optimization and cutting-edge technologies. He was also the curator and host of the 2019 Official Opening of the Leonardo da Vinci 500th Anniversary Celebrations at the National Gallery in London. As an artist, his own paintings have been commissioned and acquired by major institutions worldwide.

NEUROSCIENCE
Waqās is completing his postgraduate studies in Neuroscience at Kings College London, where he is investigating multidisciplinary approaches to the treatment of chronic pain. Another strand of his research focuses on cognitive flexibility, and his research interviews with world-leading brain scientists include Daniel Levitin, Ray Kurzweil, Noam Chomsky, Rand Spiro, Douglas Hofstadter and Iain McGilchrist. INTERNATIONAL AFFAIRS
Born and raised in Britain, Waqās has since lived in several countries across Europe, Africa, the Middle East and South Asia. For five years he was a diplomatic journalist and publisher, namely as Global Correspondent at FIRST Magazine, where his exclusive interviews included the Presidents of Egypt, Sudan, Liberia, Sri Lanka and Guyana and the Prime Ministers of Ethiopia, Malta, Romania and Mauritius. He was also editor of the Official Reports for the Commonwealth Heads of Government Meetings (2011-2015) and has advised numerous clients on international communications campaigns.
WORLD HISTORY
Waqās holds a Masters degree in the History of International Relations from the London School of Economics (LSE) and was previously a visiting lecturer in International History at the University of the West of England. His paper on the Post World War Two movement for a World Government was published in the Federalist Debate. He was editor of Holy Makkah (FIRST 2017) – the first holistic exploration of the sacred city in the English language – which received praise from UNESCO, the Commonwealth and the Vatican. 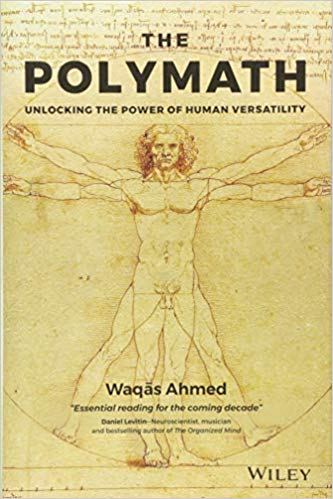 ACCLAIM FOR THE BOOK:

Waqas has written a wonderful book that is a mix of history, philosophy, science, self-help and manifesto. We need more polymaths. We need more thinkers whose curiosity wanders across disciplines. This book is a good step in that direction.

Masses of good stuff, and I don’t know anyone else who is saying it with any- thing like the range and thoughtfulness with which [Waqas is] saying it . . . with any luck, it will set the world on fire!

-Iain McGilchrist, author, The Master and his Emissary

This revolutionary book has filled one of the great voids in the history of knowledge . . . Waqas is fast emerging as a young Leonardo da Vinci’.

Himself exceptionally well-read, well-travelled and multi-talented, [Waqas] is well placed to tackle the subject in a way that is not only vastly educational but also refreshingly inspirational.

I am too stunned to comment on this book . . . I am transformed and tran- scended; I will never be the same again.

This episode will completely change the way you think about learning and human cognition.