Chance Gardner is an award-winning visual artist, 3D animator, composer, and the writer/producer of the cult classic documentary series Magical Egypt. After a 25-year career producing 3d animation, graphics,﻿ and promotional campaigns for network television, Gardner retired in the late 90s to focus on producing esoteric programming and documenting the evidence for the alternative or “forbidden” historical models of mankind. Gardner is currently in production on a Magical Egypt feature film as well as Season 4 of the Magical Egypt series.
Brad Klausen is a professional graphic designer, specializing in poster art and illustration. In 1998 he graduated from the University of Denver with a BFA in graphic design. From 2000-2008 he worked as the in-house graphic designer for the band Pearl Jam. In the summer of 2008 he left his job with Pearl Jam to form his own one man design company, Artillery Design, where for the past 14 years he has and continues to make concert posters for bands like Pearl Jam, Queens of the Stone Age, Foo Fighters, Widespread Panic, NIN, Metallica and many more. 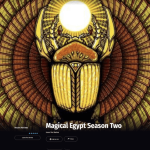 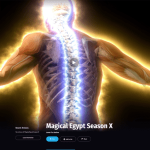